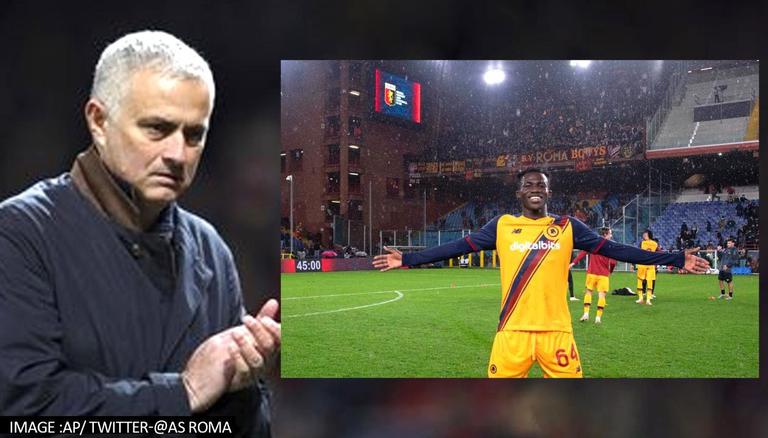 Jose Mourinho gives € 800 worth of shoes to a Roma teenager, Afena-Gyan’s reaction is priceless; LOOK

Even though AS Roma coach Jose Mourinho is often associated with controversy, he has an authentic side that often goes unnoticed.

In a recent case, the Portuguese manager kept his promise by buying rising talent Felix Afena Gyan a â‚¬ 800 pair of shoes the footballer wanted. The 18-year-old scored a fantastic brace against Genoa on Sunday to help the Giallorossi defeat their Serie A rivals 2-0.

In the video below, Jose Mourinho can be seen honoring his promise by gifting Felix Afena Gyan the pair of shoes he wanted. You can see how thrilled the young Ghanaian is to receive the shoes as he gives the Portuguese boss a big hug in recognition. The 18-year-old then wears the shoes as well and shows off some dancing skills towards the end of the video.

In his post-match interview, JosÃ© Mourinho said: “I had promised to buy Felix the shoes he really likes, which are really expensive, they cost 800 â‚¬, so he ran and me Said don’t forget! Tomorrow morning the first thing I do is buy him the boots. The 18-year-old Ghanaian was extremely impressive in AS Roma’s 2-0 win over Genoa by scoring two goals , including a stunning one from outside the box, as shown in the video below.

The 58-year-old manager then hilariously addressed Primavera, who are AS Roma’s youth squad, telling him that Felix will stay with them long after such an impressive appearance.

â€œI’m sorry for Mr De Rossi and the Primavera team, but Felix will stay with us. La Primavera is working close to us, so Felix and four or five other players have come to the senior team. impressed, it’s his cool head in front of goal. If he’s not fantastic in terms of technique, he has a strong mentality. Now you have these kids who think they know everything, but he’s humble, and you can feel that he’s absorbing all of that from information from everyone around him. It’s fantastic, “Mourinho said.