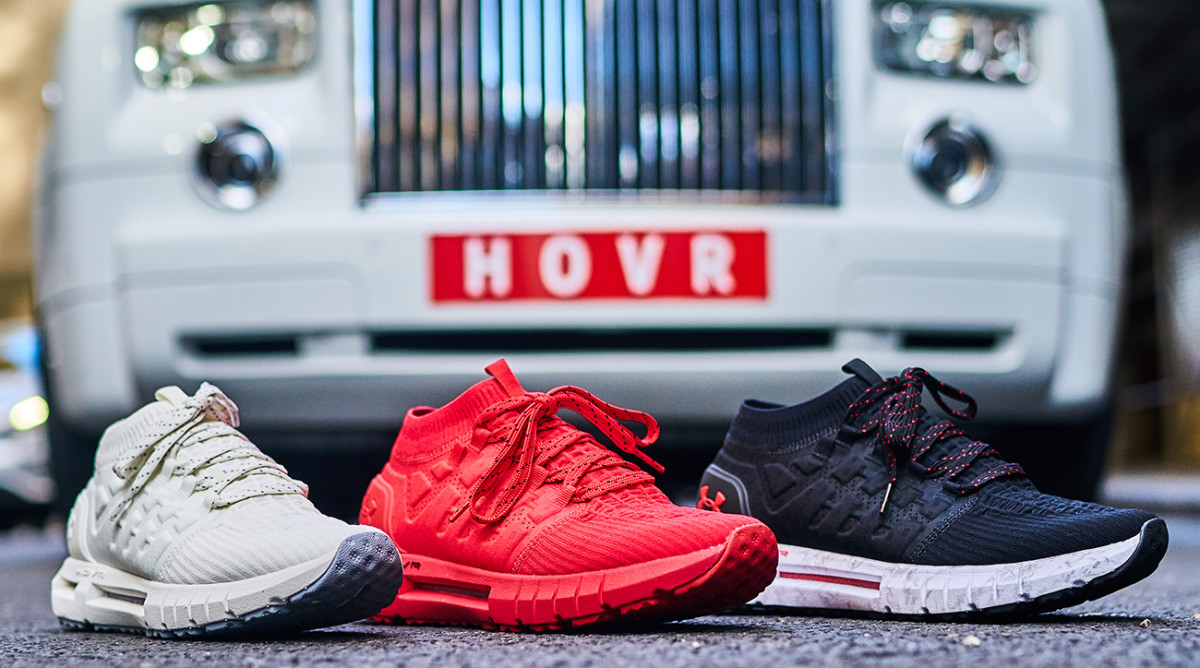 If you’ve ever used a running app, you know they can all start to blend together, and the same can be said about running shoes.

There are so many on the market that all seem to promise the same things: a lighter product, an improved experience, and new technology that promises to look like you’re not running at all.

While the idea may seem trivial, Under Armor is trying to provide its customers with the perfect combination of new running technology with a running app for the digital age with its “HOVR” shoes – the Phantom and the Sonic – that come with MapMyRun technology packed in them.

The shoes themselves are also a solid step in the next direction for Under Armor running shoes, as the shoes grip your foot and are light enough that they won’t be a burden on longer runs. HOVR technology is also a very interesting novelty, with cushioning underfoot that absorbs a lot of energy and releases a lot of it with every step.

Under Armor wanted a zero gravity feel for the shoes, so that every step was effortless and light on the runner. Nobody wants a running shoe that you have to actively think about during a run and the HOVRs do their job. Shoes are slippery when walking on smoother surfaces like wood or marble, but once outside they hold onto most surfaces well.

Many brands have tried to include technology in their shoes that helps runners measure their progress and pace and connect them with other runners locally or across the country. When using Under Armour’s Phantoms or Sonics, all you need to do is download the MapMyRun app and follow a short five-minute process to connect the app to the sensor in the right shoe. Once connected, you don’t have to worry about reconnecting or recharging the sensor. If you prefer to run without a phone in hand, the HOVRs are able to store your run data in the shoes and the information can be uploaded to the app.

What separates HOVR and MapMyRun technology from other pedals developed by other companies? Ben McAllister, UA’s director of connected fitness and products, says HOVRs can reveal a slew of data that previously would have required large purchases and additional equipment to access it before.

In short, HOVR technology makes running and accessing data from these runs more user-friendly. MapMyRun also tracks everything from calories burned to stride length and can connect to Under Armor’s other popular app, MyFitnessPal, which is used to organize a specific diet for the user. I found the connection a bit buggy – every time I tried to connect the app to MyFitnessPal, the app would crash after making a “connection”.

Despite some connectivity issues, I enjoyed using the MapMyRun app for more than just running. I especially like its community system, which will be familiar to those who use social media frequently. While many other running apps such as Nike Run Club try to turn things into competition and lend themselves to a ranking-based system that applies to some competitive runners, UA chose to create a system that looks a bit like more to a Facebook for runners. . Communities organized within the MapMyRun app connect you with runners around the world and provide more positive reinforcement for runners, instead of creating an ultra-competitive environment. For someone like me who just likes to run a few times a week and doesn’t care about the hours of competition, MapMyRun was a welcome addition to my phone. The app, as the name suggests, can also plot your run, giving you a rudimentary representation of your path and allowing for some fun opportunities if you want to try to draw a picture with your training.

Personally, I enjoyed using MapMyRun and felt it added a new dimension to my training. I used to run without an app and have a little voice telling me how far I had been, my pace and an average of my pace up to this point was heartwarming and incredibly informative. Knowing my previous pace allowed me to know how much time I had won or lost, told me when to adjust, and gave me an easy point of reference to look back on when I’m done. The app not only improves your workout but I look forward to posting about it in the future and seeing encouragement from others and it will probably convince me to go out and run more.

If you are not only looking for a new running shoe that not only offers a light and firm experience, but can also connect you with local and international runners who will be interested in your progress and give you a boost after every run once you have been rooted in the community, the Under Armor HOVR Phantoms and Sonics, along with the MayMyRun feature, are a worthy buy.