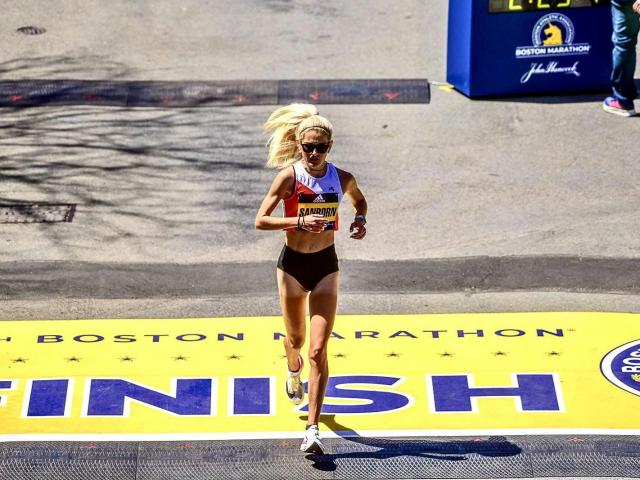 Raleigh, North Carolina — The road to the finish line is not going as planned.

Sometimes what happens next doesn’t go as planned either.

Minutes after finishing the Boston Marathon, Kate Sanborn woke up in the medical tent, contrary to what the veteran long-distance runner already qualified for the Olympic trials had expected.

The culmination of things that need to happen for a runner to run their perfect race is based on a number of factors, some of which seem beyond the athlete’s control.

For Sanborn, she was blindsided by the end.

“When I crossed the line, I passed out,” Sanborn said. who grew up in Fayetteville and now lives in Raleigh. “When I crossed, I remember tripping and waving.”

Sanborn put an abrupt end to what she hoped would be her best performance of her racing career. Sanborn placed 29th in her group and finished in two hours and 40 minutes. It was his second-best marathon time, but several minutes slower than his personal best of two hours and 33 minutes at the Chevron Houston Marathon in January.

How does a physically fit 24-year-old struggle to cross the finish line? Doctors said Sanborn had low blood sugar that day, something she hadn’t experienced since a high school cross-country meet.

Nevertheless, Sanborn was already looking ahead as soon as she regained consciousness.

“I spoke to my agent because I was trying to piece things together since I was done. He said, ‘Do you know what you said as soon as you woke up in the medical tent?’ I was like, ‘No,'” Sanborn recalled. “He said the first thing I said was that I wanted to do Grandma’s marathon, which is, like, two months away. He was like, ‘How about we get together? ‘agreement on the Boston Marathon next year?'”

In Boston, she paced at around 5:20 a mile at first, which she thought she would eventually pay for at the time. After accumulating a lot of nervous energy before the race, Sanborn thinks she could have used it to her advantage in the early stages.

The first 10 miles or so felt like other marathons she’s run, but at some point her vision became blurry and her legs started cramping. She said she lost feeling in her face and legs and had to slow down.

“I definitely slowed down. I couldn’t feel how fast I was going or feel anything,” Sanborn said. “It was like, ‘Oh, shit, we’re in a hole.'”

The stars didn’t align for Sanborn as she had hoped, but she appreciates the opportunity as well. In the fall of 2020, Sanborn was hit by a car while walking for coffee near NC State. She was unable to train for four months and did not regain speed for months and did not regain her pre-accident condition. Sometimes when preparing for a race, Sanborn will run over 100 miles a week.

“Whatever best you do that day is all you can ask of your legs,” Sanborn said. “You can do the whole workout perfectly and it can all be fine, but it’s two and a half hours on your feet and anything can happen and your body just can’t have its day. Understanding that the marathon has a lot of parts of work, I try to give him a little grace.”

“It was just a day off,” Sanborn said. “I think you have to experience the hardships of the marathon to appreciate the days when you really put everything together.”

Sanborn qualified for the 2024 Olympic Trials. She was one of the youngest athletes to compete in the 2020 Olympic Marathon Trials in Atlanta. Sanborn signed with a running agency, Elite Runner Management.

Sanborn is about to earn a master’s degree in statistics from NCSU and take a job at Duke Hospital. Sanborn graduated from Pinecrest High and went to West Point until transferring to NCSU. She also works at Runology, a running store in Raleigh, to pass on knowledge of a passion she’s had most of her life.

“I ran my first half mile barefoot on that gravel road in Michigan,” she said. “I think I was two years old. I was just yelling, ‘Run! Run!’ and I just loved it.”

For now, she is a shoe for the Boston Marathon next year, where she will seek revenge.

“It’s a part of me that needs to right a wrong,” Sanborn said. “It’s a small problem and a challenge that I want to go and conquer and do better next year.”